The Nocturnal Spotted Genets : Genets are nocturnal animals which belong to genus genetta and Viverid family which is the same family as the mongooses. There are about 14-17 different species living across the world including in Uganda’s national park. The two commonest species include the Large-spotted Genet which are also called the Blotched/ Rusty-spotted and the other is the Small-spotted Genet which is also called the Common Genet. these unique little animals can be seen on a wildlife Uganda tour. They are very closely related to civet and are often mistaken to be cats. 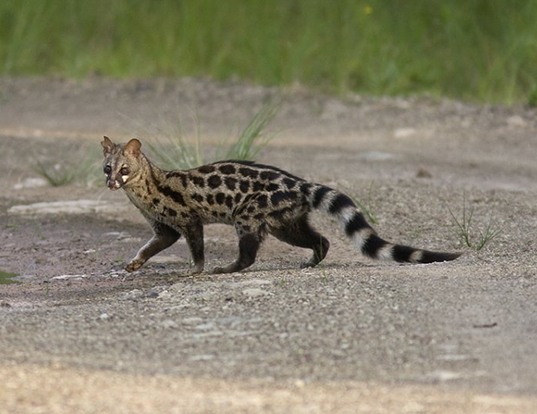 Physically, the genets are very tiny cat-like animals with a long body, very short legs and long tails as well as large ears. They have pointed nuzzle and partial retractile claws which are very useful in climbing and also catching their prey.

They have a black and white patterned sport coat therefore making them beautiful and striking in nature. The sports are more visible on those long banded tails of theirs. Genets are some of the most commonly seen nocturnal around Africa.

All species have got that dark stripe along the spine although the colour of the fur and the spot pattern may differ in the different species. They also vary in size but this depends on the specie as there are those which are as 40.9 – 60 cm.  They also have got really large eyes with an elliptical pupil while their iris is almost the same colour.  They also have the ability to roll their eyes to almost every limited level.

Just like the civet, genets too produce secretions and this is the way they send out different messages to especially the opposite sex about their sexual growth, social behavior as well as territorial marking.

In terms of verbal communication, genets will squirt a badly stinking substance to put off enemies when they are angry or frightened more so when injured and can’t fight back but need to protect themselves.

Genets are nocturnal animals although you will be able to see them during the rainy seasons. Although they are arboreal animals, they also spend a lot of time down on ground hunting for food and also finding shelter in some escarpments as well as rocky outcrops. Genets have the ability to squeeze their small and flexible bodies through an opening that is larger than the size of their heads. Mostly, they get up in the trees when they are hunt for birds that are nesting. They have got outstanding climbing skills, they can run, walk, trot and climb up and down trees or even jump.

Female genets are very territorial. They always return to that same place after being captured and released something the males never do.

The adults are very solitary and they are seen in pairs or in groups during courtship and mating periods as well as after the female has given birth, she will always be seen with her little ones.

Genets are considered to be mature at an age of 2 years only and once they are mature, they will find themselves partners. Once a female conceives, it will spend a period of 75 days before giving birth to between 2-4 kittens. In a year, a female genet can give birth to two litters. At the birth, the mother keeps in the burrow so that its little ones are born in a safe place away from predators. They are born with the eyes and ears shut but eyes open and ears start function after 10 days. They are breast fed until after 6 weeks when they introduced to solid food but do remain under their mother’s care for a few more weeks.

Once they are mature enough, they will care for themselves and even walk away from their mother to live their own life. Genets have a life span of 8 years while living in the wilderness but if in captivity, they do live much longer, a records show longer life spans.

Although they are considered as carnivores, they are in reality omnivorous because they can feed on whatever is readily available for example small mammals more so the rodents, the shrews as well as the bats, they feed on birds together with their eggs, on the frogs, the millipedes and centipedes, the scorpions too and almost all kinds of fruits. The rodents and the roosting birds as well as the reptiles are the favourite foods though.

To be able to catch the prey, genets exercise a lot of patient, they stalk and ambush them, with just a bit to the prey’s neck or the head, it is dead and good for consumption.

Genets are noted to be wasteful killers because on many occasions, after killing, they eat only the head or the breast are and leave the rest of the body part for other animals or birds like vultures.

Where in Uganda an around the world you can find genets

In East Africa, there are a number genet species for example the forest species, there are the servaline genet also called the G.tigrina, there are the large spotted genet  or the G.genetta and these are the commonest in Uganda. The latter two species prefer areas that are lightly wooded thus the reason they are sometimes seen during game drives. In Uganda, you will find servaline and the large spotted genets in places like Semiliki Wildlife Reserve while the West African species like giant forest genet are very common in Maramagambo Forest located in Uganda’s Queen Elizabeth National Park.

Genets’ live are threatened humans through their activities like settlements and farming. They are also hunted down and killed once they become a danger to poultry farming.  Other predators include the big carnivores like the leopards, lions among others, the owls, snakes like pythons, among so many others.