White water rafting is one of the most exciting water sport activity and has become a huge tourist attraction in Jinja town of Uganda. Thus, Jinja town also referred to as “the adventure capital of East Africa” and is a small colonial town located in the Eastern part of Uganda. 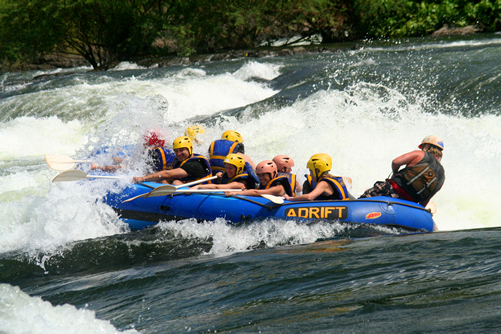 Tourists have been rafting in Jinja for over 10 years. Before John Hannington Speak discovered the source of the river Nile and the arrival of the British colonialists, Jinja was a small fishing village on the banks of the river Nile. When Uganda become a colony of Britain, the fishing village grew into a large trading centre with the Nile River an important crossing  point to the Eastern part of the country all the way to Kenya. The town continued to grow as more and more Europeans, Indians and Ugandans settled in it. When the railway and hydroelectricity power was introduced, Jinja city quickly became the most industrialized town in Uganda. However the turbulent Idi Amin regime between 1972 and 1979 caused Jinja to start losing its position as the Industrial hub of Uganda. Jinja town has however never recovered its position even when the return of the Asians. Kampala has now overtaken it as the industrial centre of Uganda. Jinja and Uganda as a whole is a great place to experience the beauty of Africa. Apart from the serenity of the town, tourists are attracted to Jinja because the river Nile and Lake Victoria and a great place for relaxation.

The River Nile is the classic pool‐drop river with deep, calm pools interspersed between powerful and exciting rapids and multitudes of different channels. At no point is the Nile constrained to one channel. The multiple of rapids between the beautiful mid‐river islands allows the expert guides to choose milder options for those not willing to subject themselves to certain dunking in the river. The opportunity to do white water rafting from the longest river on earth is amazing. The river Nile has been a source of water for several civilizations.

The trip on the water begins slowly and the first few kilometres give the raft guides an opportunity to train their crews fully on all aspects of Nile rafting. The river becomes much more adventures at Bujagali Falls and one major rapid follows swiftly after another for most of the morning. Once the rafts enter Wild waters Reserve (protects the unique flora and fauna of the mid‐stream islands of the Nile), there is more time between the rough water but the rapids become larger and more spectacular. At Itanda falls also known as the bad place, the Nile is too powerful for the rafts and so the rafts are taken around the top by land.

White-water rafting in Jinja takes you in the middle of the river Nile while passing through chaotic and turbulent rapids. The Nile rapids in Jinja are graded 4 and 5 and offer the best white water rafting experiences in Africa. The rapids flow with more volume and power than those in river Zambezi. Although the recent construction of the Bujagali and Isimba dams have led to the destruction of some of the Grade five rapids like Namizi, The Bad Place and Kyabirwa, whitewater rafting remains intact.

Rafting companies have had to adjust and change their launching point and overall route further downstream but while still offering the same adrenaline rush and beautiful scenery that it used to be. White water rafting is done in paddle‐rafts, each person joins as a member of a team and a professional guide captains the team. Paddlers are instructed comprehensively on how best to enjoy themselves on the water and on all aspects of safety including the use of safety kayaks which accompany every raft trip on the water. The highly trained safety kayakers are world class paddlers who adeptly pilot their kayaks through the rapid ahead of the raft. When the rafts flip upside down or people are washed overboard they are nearby to provide assistance in getting people back to their boats.

The grading of the rapids rafted on this stretch of the Nile range from 1 – 5. At each of the larger (higher graded) rapids you are given the option of whether you want to go the hard way (through the middle) or the easy way (around the edge). The choice is voted on, however, it might not always turn out the way you expected because you (everyone in the raft) if do not paddle in the right direction you may not take the route you wanted. The family rafting trip is a wonderful river journey for the whole family. Instead of choosing the biggest and wildest rapids, these rafts instead drift swiftly between the beautiful forested islands, bounce down smaller rapids and explore the many different channels of the river.

A day of white water rafting starts with early morning breakfast before being transferred to the River banks. All participants are required to leave their valuable and dry clothes in the car with staff. The teams are given orientation and supervision about safety and what to expect by the guides who are very experienced and knowledgeable about the area and rapids. They go through every aspect of safety to ensure that all rafters have the best possible experience. Other topics covered include how to get hold of the rope for safety, how to paddle and how to fall out of the raft in the right way. Participants are advised to remain as calm as possible if they trip over while holding their breath. Always travel with extra underwear and dry clothes. Choose clothes that dry fast because you will be in and out of water several times.

Before the activity begins, individuals are given an opportunity to choose between an easy or more difficult route. Those who are not prepared for the Grade 4 and 5 Levels can opt for the Grade 3 rafting. Families have an option of going for the slower family float trip designed to enjoy the river while avoiding the main rapids. All participants are required to sign a form with details about any ailments. You cannot go for rafting with hypertension or anaemia. Once the orientation is done, helmets and waterproof jackets fastened, the activity can begin. The first mile or so gives the guides more time to train all participants fully before the rapids get stronger and more spectacular downstream. Whenever you reach the next rapid, the guides arrange for a vote of whether to go through the easy route (edges) or the hard way (middle).

If the majority votes for the hard way, then there is nothing you can do but prepare for the challenge. The experienced rafters are taken to the strongest section of currents to allow them tip over. If the leading a group of inexperienced members, the team leader will approach each rapid at the weakest/easiest part so that they don’t trip over. In case the inexperienced group encounters a large rapid, they get out of their rafts and walk around it. Steering through each rapid offers a different experience and depends entirely on how the lead guide navigates. The main route has 9 main rapids, four of which are grade 5.  The rapids become stronger and quicker as you go downstream. In-between the rapids are calm waters and islands were participants can relax, swim, take lunch or marvel at the beautiful scenery. A day of white water rafting can cover a distance of up to 26 kilometres. Expect to encounter locals fishing and drying their clothes by the riverside.

Is water rafting safe to do?

White water rafting is 100% safe because the crew is highly trained and experienced in navigating though the rapids. It is important to follow instructions from the guides for your on safety and enjoyment. Participants are given life jackets and strong helmets to protect them from in case they trip over. Talking about tripping over, one needs to hold on to the ropes around the raft or raise their knees to their chest each time they plunge beneath the waves. The river Nile has deep waters and one doesn’t need to worry much about falling on rocks. Rafting in many countries is more dangerous because you can hit on a rock when you fall even though the waves are smaller. It is why the guides in Jinja are more willing to let the rafts flip over several times because the threat from the rocks is minimal.

Moreover, there are several rescue teams that move ahead of the group in Kayaks with the task of rescuing any stranded rafters. The rescue team is also responsible for carrying snacks and fresh fruit that are consumed during the main break.  Apart from the rescue Kayaks, there are also the safety boats that take away participants who no longer wish to continue. The rafts for families with younger children and adolescents do not go through the largest and most difficult rapids. They take a different route passing through smaller rapids and scenic islands to explore the forests and other channels of the river. 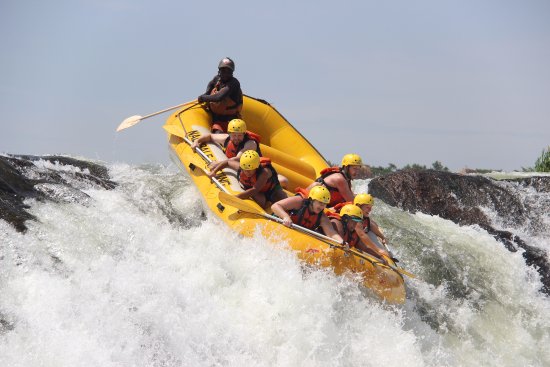