Rwenzori mountain national park is one of the national parks in East Africa with the 3rd highest peak known as margherite peak raising 5,109 meters long above the sea level. The park lies in four districts and these include Kasese, Bundibugyo, Kaborole and Ntoroko in southwestern part of Uganda. It is bordered with Virunga national Park in Congo at a low and high altitude of 2,500 meters [8,200ft] at edge of African rift valley. The park covers 996 square kilometers of its land of which 120 km long and 48 kilometers wide. 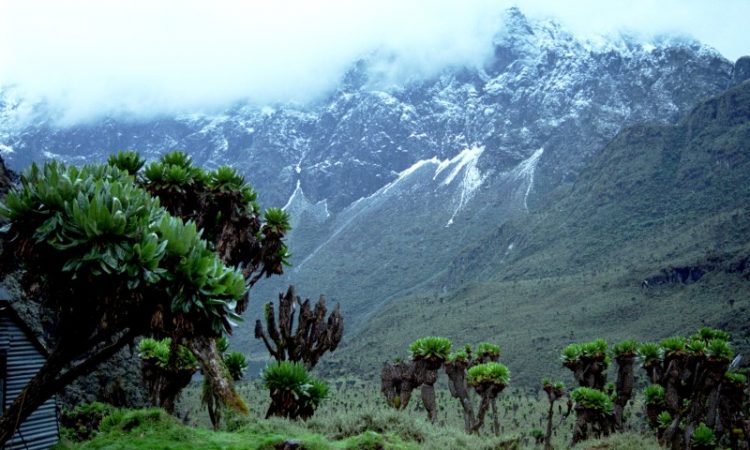 Rwenzori mountain national park is divided into 6 glaciers peaks including Mount Stanley bordered with Congo, mount baker, mount Emin pasha, mount Speke few but to mention. It also has waterfalls, snow fields and lakes. The park has  got mountains which are higher than the Alps with snow capped land. It has got very many species that are endemic to the Rift valley such as 15 species insects, 4 species primates like black and white monkeys, L’Hoest’s monkeys, duikers, Rwenzori turaco, hyrax, chimpanzees, 89 species of birds such as the handsome francolin, Rwenzori Batis, Golden winged sunbirds, Long eared owls, Rwenzori brown woodland warbler and many others, antelopes like bush bush, reptiles such as the three horned chameleons and over 200 species of mammals like elephants, leopards and the Rwenzori otter and many others. The various species are protected by Uganda wildlife Authority and it has become a UNESCO heritage site in 1994.

Rwenzori mountain before it was before named as the “mountain of the moon” by the historic Alexandrine Geograprapher in the A150 century. It was later explored by the man called Henry Stanley who placed this area of the mountain on the map on may 24th in 1888. Henry Stanley named it Ruwenzori which comes from the local word meaning “cloud king” and in the precious years it was named as Rwenzori Mountain National park.

The park was described as the most unique place in the world because of it highest peak in the Africa, known as the margherita peak twin to mount Stanley which measures 5,109 meters long {167ft} wide above the sea level. The park is a mountainous area which ranges above the sea level at low and high altitude.

Mountain Trekking: To climb up to the top of the peaks it takes 7 to 9 day with the help of the skill full climber. As the tourists are climbing, they are offered to do circular tour on the mountain. By doing circular tour they can as well join the central circular tour after bujuku valley via Nyabitaba. They can also enjoy good viewing of flora and faunas species as they do the mountain trekking safaris.

Cultural encounter: The park is surrounded with different tribes the Bakonzo tribe who live in Bulembe ihandiro cultural trails known as Bakonzo community. Tourists are to be guided by the community guide who introduces you to the local people who are good in making traditional medicine. Travelers can also visit their craft shops materials which are handmade materials such as baskets, bags, shoes and many more. They can enjoy their traditional dances.

Bird watching: The park is a sanctuary for forest reserves and the tourists who prefer bird watching safaris can visit the Rwenzori mountain national park to spot a number of birds such as malachite sunbirds, brown woodland warbler, long eared owl, handsome francolin, Rwenzori batis, golden winged sun birds and many others.

Guided hiking: Hiking can be done in trails of lake Mahooma, Karangura ridge as well as Buraro chimp forest, where tourist can be able to do chimpanzee trekking. This trals link you to the neighboring areas like the Bundibugyo area through Bwamba pass. Tourists can enjoy good viewing of various species of birds, mammals and vegetation species and the panoramic view of mount baker.

Rwenzori mountain national park can be reached approximately from Kampala with in 6 hours and 40 minutes by road for distance of 297 kilometers. Alternatively a tourist can fly from Entebbe airport to Kasese air strip with in 2 hours and 45 minutes.

Rwenzori mountain national park has got unique hotels where tourists can stay and these include Equators Snow Geo lodge, Executive lodges, Equators snow lodge, Long Bellavista and many others depending on the tourist budget.

The best time to visit Rwenzori mountain national park is in the dry season from the month of January, march, june, August, November to December when the trails are not slippery.