Chimpanzee Trekking in Uganda is one of the most engaged in tours that primates lovers sought for in different locations in the country. 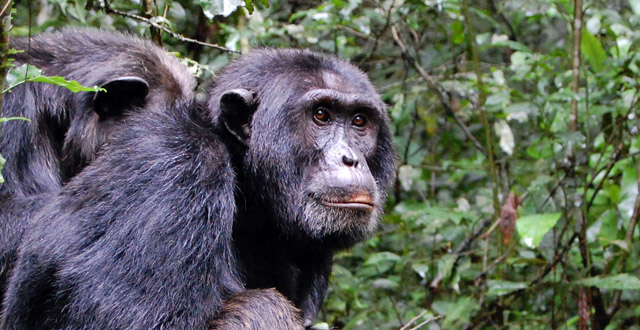 Chimpanzee trekking is one of the famous activities done in Uganda’s tours, which runs throughout the year because of the great appearance of chimpanzees, chimpanzee trekking has become the main touristic attraction along with the mountain gorillas. This popular activity has impacted a lot on Uganda’s tourism industry. Chimpanzee trekking is carried out in different forests but in the boundaries of the national parks of Uganda, these include Budogo forest in Murchison falls national park which is situated in northwestern part of Uganda, Kyambura gorge in Eastern part of Queen Elizabeth national park located in western region of Uganda in kasese district, kibale forest in kibale national park situated in western region of Uganda in kabarole district bordered with Kamwege district.

Budogo forest is located in the northwestern part of Uganda on way along to the notable Murchison falls national park and is situated on the north east rim of lake Albert. Budogo forest is the largest nature forest in Uganda, composing a total area of about 824 square kilometers{319m} 55% covers its forest and the remaining is grassland. Budogo was derived from the local Banyoro ward which means “the fertile soil” and this forest is under the protection of Nature Forestry Authority and is a world heritage site.

Budogo forest was gazette in 1932 has a home for variety of species of over 290 butterflies, 465 species of trees,24 mammals ,9 primates and over 360 species of birds. The forest has got tourists sites such as kaniyo pabidi ecotourism site, Busingiro ecotourism site which are located at the edge of the park surrounded with iron trees and mahogany trees. It has got water streams of Waisoko, Kamirambwa, Sonso, and Siba that flow its waters in lake Albert and it has annual tropical rainfalls that range between 1200m and 2200m above the sea level.

Budogo forest is well known has a home for the largest population of chimpanzees in Uganda of over 600 to 700 species and is also famous for the East African mahogany trees which measure 80m tall and some 20m in the boundary. And is one of the leading chimpanzee safaris in Uganda where one wishes to visit and explore these apes.

Chimpanzee trekking takes 3 to 4hours usually begins in morning hours led by the Uganda wild authority guides who takes you through the forest trail heads as you trek, the movements of these great apes it depends on how you penetrate through the forest. Through  having this amazing experience you’re able to ask the guide about their social lives, in so moving through this think forest tourists can be able to view various species of birds like little green bird, white spotted fluttlail,yellow manted weaver, slender billed greenbul,forest robin and the rare bird known as Duval’s illadopse, other primates like blue monkeys, white colobus monkeys, red tailed monkeys ,olive baboons and you can also get chance to see forest inhabitants linking salt by the forest river such as animals include lions,leopards,buffaloes and many others.

Chimpanzee tracking permits cost USD150 per person, by 1 July 2020 it will increase from USD150 to USD200 per person per track and when you want to visit Uganda primate tours, it is better you do reservation arrangements for chimpanzee tracking tours in time like 6month ahead your arrival in Uganda. For more information, you can get it online magazines or tour operators. The best time to visit is from the month of June, August, November, December to February when the forest has a high supply of fruits for these apes.

While a tourist is at Budogo forest can sleep in wider ranges of luxury, mid-range and budget and these include Budugo eco lodge, New court view hotel, Masindi hotel, Hotel victor Bijja, kabalega resort hotel and many more depending on your wallet.

Budogo forest can be accessed from Kampala City with in 3:30 hours by road and you can as well fly in to and from Entebbe airport or kajjasi Airstrip within one-hour landing to pakuba airstrip.

When it comes to Kibale National Park which was established in 1932 has forest reserve and in 1993 it was upgraded to protect the wide range of endangered chimpanzees of over 1500 chimpanzees and other 12 primates include colobus monkeys, blue monkeys, red tailed monkeys and many more. Kibale forest is located in western part of Uganda and covering some total areas of its low land of about 766 square kilometers, its tropical montane rain forest above the sea level at edge rift valley.

Kibale forest is Uganda’s main attraction place for these thousands of chimpanzee of over 1500 of them, mammals,12 primates and many more. Chimpanzee trekking has become popular activity done in the East Africa tours most especially here in Uganda in so mentioned forests. Tourists who enjoy doing chimpanzee trekking can go on Uganda’s safaris to have these great moments in life and is one of the famous activities that run throughout the year worldwide.

While tourists are busy having this amazing experience lead you by Uganda wildlife Authority ranger or guides, which can last for over 3 to 4 hours, you can be able to spot number of species; red colobus monkeys, African buffaloes, common warthogs, African golden cats, Servals, the rare endangered L’hoest’ monkeys and over 325 birds like olive long-tailed cuckoos, western tinker birds. This is best done in dry seasons in the month of June, July, December to February.

Kibale forest is surrounded by comfortable hotels where tourist can sleep and they include; Nyaika hotel, koi loi hotel, Green home and cottages, fort breeze hotel, Ataco country Resort and many more, it depends on tourist budget.

There is also Kyambura gorge which is located in the boundaries of Queen Elizabeth national park situated in western part of Uganda in kasese district, covers 1,978square kilometers of its lowland (764sqm) and it comprises of 400kilometers of distance by road passing via the south western part of Kampala the capital city. Kyambura was derived from the local chambura ward which means the valley of apes.

Kyambura gorge is forest reserve with the largest deep crack in East Africa with streams of kyambura river that keeps the forest with availability of food and water for wild animals. Kyambura gorge is well known of being the habitant for famous primates, of over 500species of birds and forest is climatic with rain timber land, vegetables which is the staple food for these apes.

Chimpanzee trekking can be carried out with in this gorge by the tourist who like to explore chimpanzee safaris and while they are busy trekking these chimpanzees in their inhabitants, they can be able to do game viewing, bird watching such as shoe bill Chapin fly catcher, African skimmer, great flamingos and they can have god view of volcanoes.

Kyambura gorge has got unique hotels where tourists can sleep and such lodges include kyambura gorge loge, Engazi Lodge, Katara lodge, Emin pasha lodge and many more, depending on your budget.

Chimpanzee trekking has become famously activity done in Uganda tour destinations, giving you great experiences on how they behave with their younger ones, display their nest high you can book in advance for quick arrangement, it also depends on how many days you wish to stay in that particular place.

Kyambura gorge can be accessed from Kampala the capital city with in a 6hours by road, and alternatively tourists can fly to and from kajjasi airstrip with in 2:15hour to mweya airstrip to reduce on driving hours.

These are the things tourists should carry along for chimpanzee trekking such as rubber boots, long trousers, long sleeved shirts, insect repellents, sweaters and many more.