Lion tracking experience is off the beaten track path with a unique experience which can not be done in open public places. This unique activity is carried out in Uganda’s most prominent safari destinations. Basically, these are the few to be mentioned Queen Elizabeth National park, Kidepo valley national park, and Murchison conservation area. These are the best habitats for finding lion pride. Lion tracking is the second famous activity done in Uganda among others like gorilla trekking. Lion tracking is such an awesome experience where travelers encounter with one of the big 5 in the jungle and come to know about the lifestyle of the lions, their behavior, social life and the way they feed in the wildness. This experience is carried out by the professional Uganda carnivore project who teaches the local people on how they can live in harmony and on how to defend their own in case the lion has escaped from the park. 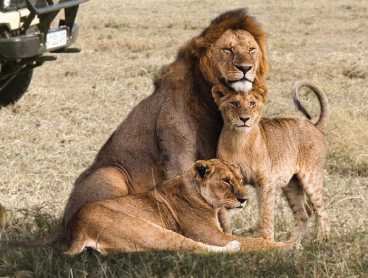 Lion tracking can best be done in Queen Elizabeth National Park, which is popularly known as a gazatted area with the highest population of lions. Queen Elizabeth national park is located in the western part of Uganda. The park can be reached from the starting point of Kampala City. It takes 6 hours 30 minutes by road passing via the beautiful town of Mbarara.

Lion tracking is quite an awesome experience that can be carried out within the park at the side of Kasenyi plains through game drive by a professional guide with set caller radio that helps to trace the movements of the lions. This experience can reward you to get closer to the pride and have an impressive encounter of the lions which is one of the giant animals, travelers can wish to see before departing. Lion experience requires few people to engage in this activity, unlike in regular game drives where there is no limited number of participants.

Fortunately, lion tracking is holding the second attraction in Uganda safaris with the highest population of tourists which has politely impacted on Uganda’s tourism, whereby the lion population is increasing day by day & has entrusted the Uganda wildlife Authority body on sustaining lion tracking in Uganda. Recently they have spotted new prides of over 11 lions close to Hamukungu in Queen Elizabeth National park which shows that there is a steady increase in the population of lions.

To engage in lion tracking, it is advisable to book as early as possible for your early reservations to be made. When this booking is carried out late, the prices may increase due to delayed reservations.

Cost of a Lion Tracking Permit

Lion tracking permits cost USD 60  for foreign residents and for East African people, it costs UGX 100,000. The booking for lion permits can only be made from the Uganda Wildlife Authority. You can book with us Achieve Global Safaris for your easy arrangement and come to be among the thousands of travelers who have engaged in one of the most impressive to safari encounters.

When to do this tracking

Lion tracking is best done in the morning hours and late evening hours when the weather is still cool to catch up with lion hunting. The lions can also be found in the trees in Queen Elizabeth National park which is famously known as the tree climbing lions during the day hours when they are resting.

How tracking can be done.

Lion tracking is done through tracing lion movement which is led by the professional guide holding set radio caller within the park in the open savanna grassland where the pride of lions passes as a team. It eventually alerts the researchers on which side are the lions are located. The researcher and the travelers will follow the movement of the lions that have been alerted by the radio call.

How do lions make their movement?

Female lions are the ones to hunt for the pride and they do feed on herbivores most especially the antelopes that are found on the African plain such as savanna grassland. They move in a group where each family has over 25 -30 members in their territory where they belong, one king in those families who does not allow any other king to trespass leads the territory. They live a pride of around 15 individuals.

There are also other activities travelers can engage in such as game drives, nature walks, bird watching, boat cruise, chimpanzee trekking and many more.