Volcanoes National park is located in the Northwestern part of Rwanda bordered with Mgahinga Gorilla National Park in the western direction of Uganda. The park is also located east of Virunga National Park in the Democratic Republic of Congo. The park covers an area of 160 square kilometers and half of the land is covered with rainforest known as a bamboo forest. The park is the oldest and largest in Africa containing a wide range of vegetation at an altitude of about 2400 to 2500 meters above sea level. 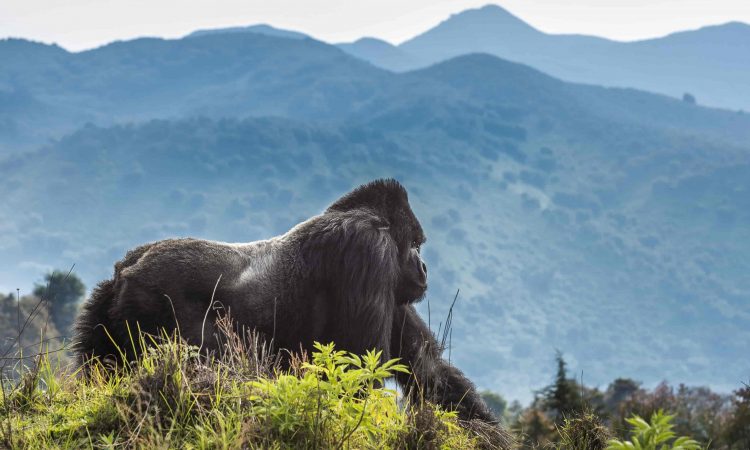 Volcanoes National Park is popularly known as the home for great apes famously known as mountain gorillas which were discovered by the American zoologist known as Dian Fossey who first arrived at Karisoke in Rwanda in 1967 and established a research center for mountain gorillas between Karisimbi and Bisoke till 1985. These trailheads of Karisimbi, Bisoke, and Karisoke have become habitats of over thousands of mountain gorillas which has made Rwanda gorilla safaris to become the top destination in Rwanda. All this happened because of the great work that was done by prominent Dian Fossey.

The park was gazetted in 1925 as a small area to protect the endangered gorillas from the poacher’s hand who used to kill animals for their own consumption. Later on, in 1929 the park extended further into Rwanda and Belgium Congo to form a low land covering an area of an 8090 square kilometer. After 1958 half of land of about 700 hectares of land were cleared for human settlement.

The park is a sanctuary for gorillas, golden monkeys, chimpanzees, crater lakes, swamps among other attractions. The park gained a lot from the coming of Dain Fossey because the number of gorillas increased in an area and the park became a UNESCO world heritage site.

Unfortunately, in 1985 Dian Fossey who came as a researcher was killed by unknown poachers who were against Fossey’s gorilla protection strategies and she was buried in the park near to the research center in the midst of gorillas which were her life. After the killing of Dain Fossey who was the researcher, the research headquarters became abandoned in 1992, no tourist activities were carried out.

Later on, in 1999, it became safe and it was managed by the Rwanda government. The park became the richest wildlife community in Africa with an estimation of 450 plant species, 178 species of birds, 100 species of mammals like black-fronted duiker, buffaloes, elephants, bush among others. There are also 16 species that are endemic to Virunga, 12 are primates and many others.

The park is one of the few places in the world where the endangered mountain gorillas live and it attracts people from different races of the world to come and visit Rwanda.

Gorilla trekking is one of the greatest wildlife experiences on the earth and in Volcanoes national park. The number of mountain gorillas has increased to over 400 individuals, habituated in 13 mountains gorilla families that can be visited by the tourists. Gorilla permits are sold at a cost of $1500 only per person. During gorilla trekking, you will spend some time searching for the gorillas and once you find them,  you will be given 1 hour to spend with them as you observe and take photos.

Guided nature walks in Volcanoes are carried out to observe different species on foot with an armed ranger guide. You will be able to spot different primates species like golden monkeys, colobus monkeys, golden Cercopithecus, and mammals such as bushbuck, black-fronted duiker, buffalos, elephants, spotted hyenas, giraffes, many other species. You can also see quite a variety of bird species.

Boat launch, Volcanoes national park is surrounded by swamps, lakes named lake Ruhondo and Bulera where tourists can enjoy the boat cruise guided by an expert guide. You can be able to view different water birds such as Black bee-eater, Red-headed blue bill, yellow-eyed black flycatcher and also water animals like crocodile, hippos and so much more.

Mountain climbing and hiking, Climbing of mount Bisoke gives a great view of the scenery and since Rwanda is bordered with Uganda, you will get a chance of sight viewing the highest mountain in East Africa known as Rwenzori Mountain which is located next to the Rwanda border. Tourists who desire to do hiking safaris, volcanoes national park can be the right destination for you, where you will have a wonderful experience along Karisimbi volcano which measures 3800 meters high above the sea level.

The best time for visiting Volcanoes national park is in the dry season from the month of January, March, June, August, September to December.