Animals in Murchison falls National park are the key natural features in the park that attract travelers to come and explore the amazing destination. Murchison falls national park is famously known as the oldest and largest national park among the national parks in Uganda, the park is a landmark of 76 mammal species that make up Murchison falls to be a gazetted area for game reserve a home that includes the 4 of the big 5 African Mammals. In regards to complete the big 5 list, you just need to pass by the Ziwa Rhino Sanctuary on the way heading to the park. The animals in Murchison falls national park are often seen while on a boat safari and also during game drives in the park. Such common animals often seen are Giraffes, Buffaloes, Uganda kobs, Bushbucks, Elephants, Hartebeests, Oribs, waterbucks, warthogs, hyenas mention but a few. Then the high chances of seeing the big cats of leopards and lions is in the early morning for a game drive before the sun is too much to force them into their hideouts. Since Murchison falls national park has the largest area, on its boundaries, there is a tropical rain forest a home to several primates such forest is known as Kaniyo pabidi forest which is part of the so sounding Budongo forest the natural forest which has been existing for years, these forests they inhabits primates like the unique endangered chimpanzees, patas monkeys, Blue monkeys, Red tailed monkeys, Olive baboons, Black and white colobus monkeys among others. 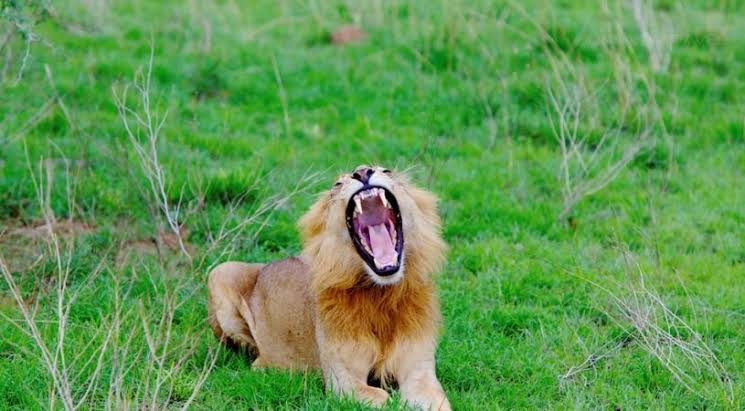 Murchison falls national park was the first established national park in Uganda in 1952 as a gazetted area for game reserve and forest reserve. The park measures a total land of over 3893 square kilometres of its low land and is the largest park among the ten national parks in Uganda. It was named after the Murchison falls where the stunning river Nile is forced through a narrow gorge of 8meter into the admired ‘’Devils Cauldron’’ creating an ever-present rainbow. The European explore prominently known as Sir Samuel Baker considered the Murchison falls as the most preserved object of the entire course of the river called the waterfall and that happened in late 1864. Murchison falls national park host over 76 mammal species, more than 500 bird species, 13 species of primates, 250 butterflies, 450 tree species and many more.

Murchison falls national park is a home for over 76 mammal species such as the herds of elephant which can be scattered in the savannah woodland areas of the park, herds of buffaloes all these species can be easily spotted during the game drive in buligi plains. The park is also a highlight of the big cats, for example, a good number of leopards which can be spotted in the shrubs and the kings of the jungle’ ’lions’’ which can be clearly seen in southern part of Murchison falls national park, on the other hand, the park also boasts with the endangered Rothschild giraffes. They can also be found in a true African wilderness ‘’Kidepo valley national park. The commonest mammals to be seen in Murchison falls are the bushbucks, warthogs, Jackson’s hartebeest, Uganda kobs, crocodiles, hippos and many more.

Primates: Murchison falls national park is popularly known as a home for the big 5 animals not knowing that but also a gazetted area for great apes which are almost a cousin to humans. The park hosts over 13 species of primates such as olive baboons which are the commonest primates and can be spotted anywhere on the park’s boundaries. They look like humans and for you to have a clear viewing of them you have to keep your car windows lower. Other primates include blue monkeys, black and white monkeys, Red tailed monkeys which can be seen in the forest areas of Murchison falls national park. The most highlight primates here are the chimpanzees which have made a number of visitors to visit the park on their chimpanzee tracking safari. The endangered chimpanzees are said to be 98% to human genes which has impacted a lot on Uganda Tourism hub, above all, they can also be found in Kibale national park a mother nature of primates as well as in Queen Elizabeth National Park, Kalinzu forest which is closer to Queen and Budongo forest in Murchison falls national park. Perhaps, Budongo forest is known as the oldest natural forest in Uganda and the tall hardwood trees famously called Mahogany trees which are adaptable to Chimpanzee’s lifestyle.

The kaniyo pabidi which is part of Budongo forest are positioned in the boundaries of Murchison falls national park which is a home of primates and perhaps its where the incredible experience of chimpanzee tracking is being carried out, the activity allows you to stay in the presence of chimps for one hour watching them play, eat, rest and grooming each other and just know that the forest harbors with over 700 chimpanzee individuals. There is also another chance of Chimpanzee habituation experience which is a full day activity while on your primate walk you get an opportunity of viewing big games around the forest such animals include buffaloes, elephants, bush pigs and rewardable magnificent scenery of the land scape.

BirdLife: Too many travellers who have never visited Murchison falls national park may think that it is a home for big game animals and primates not knowing that is a home for birding paradise with numerous bird species that shade the skies of Murchison with beautiful colors. The bird species within the park are categorized based on the natural habitats where they dwell, that is the water birds, savannah birds, forest birds, Albertine birds among others.

Murchison falls national park is a haven for birders which is home to more than 500 bird species and along to your birding safari in the park you get a chance of spotting prehistoric bird knowns as the shoebill stork. Besides the shoe bill, there are also other endemic and special birds in Murchison falls national park such as the yellow foot kingfisher, white thighed ground hornbill, goliath bird, gonoleks and many more. Other spotted birds but few to mention include Black headed lapwing, Rock pratincole, Black-billed Barbet, Long-toed plover, Veracious Dove, Weaver birds, long-tailed Nightjar, Martial Eagle, Silver bird, Blue-headed Coucal ,Standard winged Nightjar, Swamp Flycatcher, Saddle-billed stork, Senegal Thick Knee and many more. To note, Murchison falls national park is one of the best birding destinations in East Africa.

Murchison falls national park is a gifted mother nature of wildlife species with rewardable spectacular scenery of land scape. Visit the park throughout the year and enjoy the experience of wildlife, view the park’s escarpment and thus leading you to memorable encounter on the African continent.